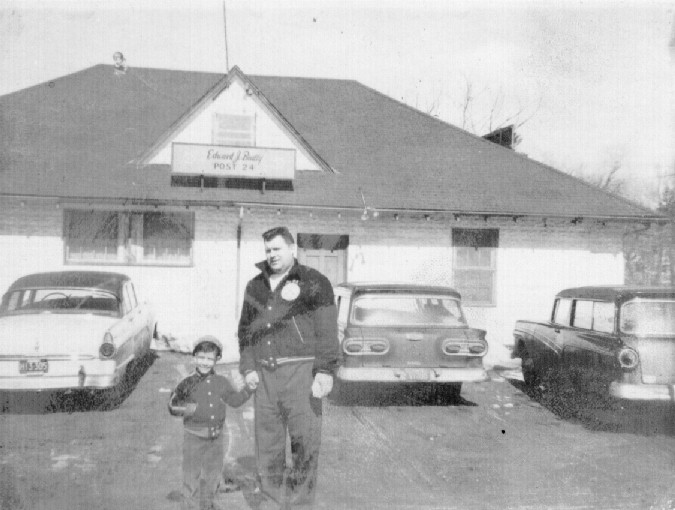 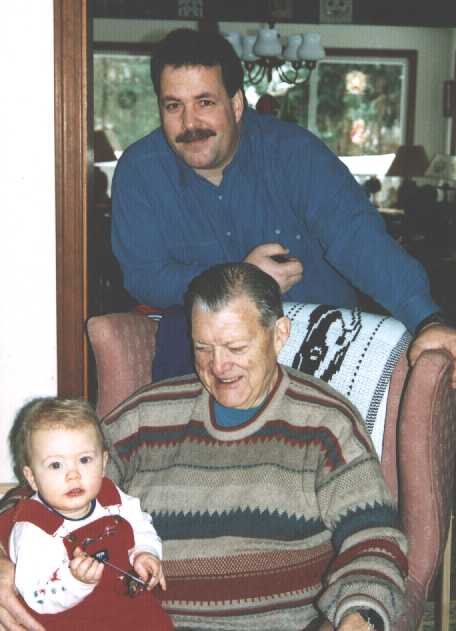 Thank you for coming to our Dad’s service today. Usually by this time Dad would have already taken care of the lottery at the bar. That was his job, and I think he really liked it. After he checked all of his totals for the fifth time He’d sit with Donna, Donald, or Wendy putting his two cents in about something they had already made a decision on. "Big D" was a classic. He was the ultimate "Joe the Bartender". He loved life on both sides of the bar. His customers sometimes became lifelong friends. For my brothers and sisters and myself, it was a strange place to grow up in. We met some weird and wonderful people with names like Renzo (Piana), Sherm (Feller), Bozo (Kelliher), and Jorgy (John Jorgenson). Many have passed on, and many of you are here today. My family thanks you for your friendship and support over the years.

The café has been a big part of Dad and Mom’s life for fifty-one years. It’s a place filled with many memories. It’s also a place that made my dad a local celebrity of sorts. Everyone knew Big D. Everyone also knew Big D’s kids. We weren’t Donna, Donald Wendy, Gary, and Billy. In school and around town we were Big D’s kids and proud of it. My mom however, wasn’t just known as Big D’s wife, she was "Mary", and everyone knew she was the strength and support behind Big D. Mom and Dad shared many things throughout their marriage, and like all couples, they shared good times and bad.

It all started after they eloped and went of on their one night honeymoon to the Island,,,,, Rhode Island. The first few years were tough for them, but because of their strong partnership they were able to survive and make their way from living with each of their parents for a while, to a small low rent shack on Washington Street. After that they moved into the veteran’s project for a while, and then back to Washington Street over the café.

After working and saving, They finally settled into their dream house on Lillian Road. They were partners, and when it came to designing and decorating the inside and outside of the house, they both used their own unique style. Inside the house, mom had a living room with a beautiful couch, nice chairs, and two end tables with pretty little music boxes on them. Dad on the other hand had a den with a new lazy boy every two years, signs by "Budweiser" a well stocked bar, and a Jukebox….. Outside, Mom planted flowers in neat little rows; she had cute little bushes, and pretty rock gardens everywhere. Dad on the other hand had a goldfish pond, a beer bottle shaped swimming pool, and a great big rock with a big white D painted on it.

Dad was the typical old fashioned, hard working, strict disciplinarian. Mom was the typical Italian, "wait until your father gets home" mom. While we were growing up we did hear a lot of arguing. If it’s true that people argue because they love each other, Boy oh Boy, did they love each other. Sometimes, some good would come from it though, after a good argument dad would sometimes take us all on guilt trips. We’d go to places like Benson’s Wild Animal Farm, Old Sturbridge Village, and Duxbury Beach.

Forty-eight years of marriage, five kids, five grandchildren, and two Boston Terriers later, I often wonder in this day and age of failed marriages, how they ever lasted together. There were many times when as strong as she is, I know Mom almost threw in the towel. We are all very thankful that she didn’t.

Growing up as one of Big D’s kid’s I can tell you that he was a very loving and caring father and over the last four years, an even better grandfather. He was also very brave in the end. Sharing his last days and hours with him also made us brave. We thank God that we were all able to say goodbye. All of us, including Laurie and Sarah and Dad’s brother Richard took turns staying with him around the clock. I can’t tell you how much his last visitors meant to him and his family. To know how many people loved my father made it a lot easier on both Dad and us.

I know that each of us will always hold one last memory of dad. Mine is when he told me not to take it so hard after I said what turned out to be my goodbye. Bill is sure that before he stopped breathing Dad had already arrived in heaven. He told me that after being out of it for a while, dad opened his eyes very wide, looked at him and smiled that "Big D" smile one last time.

Well, I think you’re right about heaven Bill, but I think the reason he was smiling was because he had already been reunited with his family, he found Renzo, and because he knew Sherm Feller, God put him in charge of the lottery.

My wife Sarah recently brought Bill Cosby's CD "Wonderfulness" home. She absolutely loves his stories about growing up. Our children Louis and Caroline have already memorized each story by heart. I bought "Wonderfulness" on a vinyl LP years ago and can remember laughing until my stomach hurt just the way my kids do when they listen to it now.

I woke up this morning with a full cup of coffee and an omelet waiting for me on the table in front of me. My son was standing at the kitchen table where my wife was helping him sign a fathers day card for me. He handed me the card along with one from my wife who was sitting there with a grin from ear to ear. I asked Louis which card I should open first. He said mom's. I opened it and there was a train on the front. Well, Louis loves trains, and he said that he should have gotten that one for me. I opened Louis' card next and there was a picture of a toilet on the front. Just a toilet. I was already laughing to myself because I knew exactly what the card said. inside, It read "Happy Fathers Day, from your little squirt". The reason I knew was because it was one of the last Father's day cards that I had given my dad. I didn't tell my wife or son about it because we had a good laugh.

Caroline came downstairs in a while and Sarah went through the same card signing routine with her. It was at that point that I got my real fathers day present. It wasn't the card that Caroline carefully scribbled her name across two lines on, but it was just being able to watch her do it from across the room. Sarah came over and sat with me while I opened Caroline's card. There again on the front was another toilet. I laughed once again thinking that inside were the very same words as Louis' card. I was wrong. I opened the card, and below Caroline's lovingly scribbled signature were the words "Happy Fathers Day", and below that, "Today She's All Yours". If you know Caroline, my strong-willed little girl, then you know exactly what that card means.

I started to speak to Sarah about how I felt today. I don't know what made me think that I could ever have such a conversation with her without getting emotional. Sarah can tell right away when it's going to happen, and she asked me if I missed my dad. Well I said "yes, I miss my dad", but that's not what got me going. I was just plain full of "Gratefulness". It's one of those times in life that you really get to see the work of God and the fruit of your efforts at the same time. I will always miss my dad, and because of him I will always be grateful for being a dad. It all happened in about 20 short minutes on Sunday morning, Father's Day 2000.

On Sunday May 7th, 2000 My father and other wartime veterans received their high school diplomas from Canton High School. It was all part of a national program called "Operation Recognition." It was a very special day for the town of Canton. My family and I would like to thank Tony Andreotti and the Canton Veterans Services for  making this possible. We were all there cheering on the graduates as they or their family members accepted their diplomas. My Brother Donald Jr. accepted for Dad and I'm sure he was smiling down from heaven for having been given such an honor.